Life through the eyes of a tree: leaves

(This is the third and final part of ‘life through the eyes of a tree. The previous parts, the heart and roots can be reached by clicking on the respective links.) 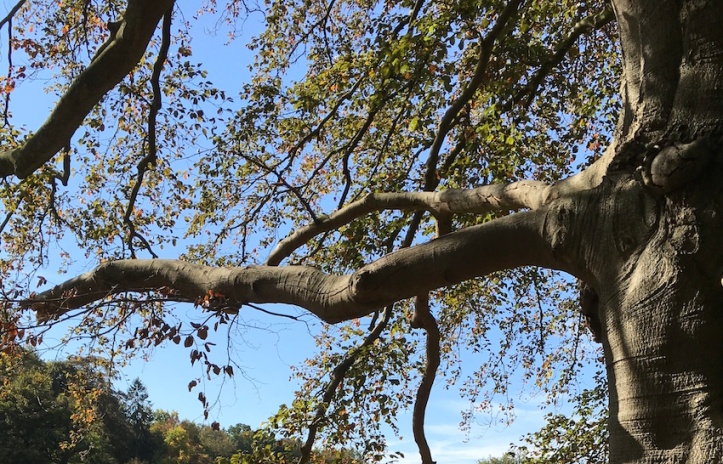 Imagine freedom, dancing in the wind, a life spent as pure breath, lived on the wings of song.

What do you see when you look at the sky? Is it what science tells you – a place where nothing happens, just some molecules spread out thinly, or is it a place of wonder? Even with human senses, you can perceive some of its miracles: just think of the wonders of sound. And your cell-phone may have convinced you of just how much information that ’empty’ sky can carry.

Now, imagine that you could be just that, that your life could be spent simply as an antenna listening to these songs, helping them get carried along, shouting out and adding your own voice to the concerto. Imagine, being a leaf of a tree.

Who ever told you that trees do not have ears, that they do not have eyes? They do, they just do not see in the same way as us.. Every leaf is a living organism on its own. It breathes, it has a heartbeat. And it hears the whispers of the wind, because it dances along with it. It hears the subtle vibrations of birdsong, and responds to them with tears of joy.

Imagine having not one, but thousands of these little ears at your disposal. Like pixels on a screen, they form a reflection of the vibrations of the sky. Then this picture is enriched by the rays of the sun and the way they hit the leaves.

The tree is the dancer, that performs a ballet with the wind every day. The audience is the entire forest. Connected by underground fungi, the earth itself becomes aware of the love song high above.

And then, at some point, the coming of winter is announced, and the theatre closes for its winter recess. But not just like that. One final show will take place. And this time the leaves are not merely listening. This time, they are the messenger. They shout out their appreciation with a dazzling display of colour. Going out with a bang, they call that.

I repeat my suggestion. Imagine being a leaf. Imagine living a life that consists of nothing but dancing with your surroundings, of being part of the most magnificent painting of the planet. Pure expression.

To then end your life in the womb of mother earth, dreaming of another year, of a rebirth where you yourself will be the foundation for the next generation. Alive through others. Listening to the concertos that you used to be a part of yourself. Rejoicing in the memories of song.