On the divide between science and spirituality (II)

This week’s post is a guest post by Saille Freeling, one of my fellow contributors at Anima Monday. She offers her experience as a scientist who was forced to believe in the ‘woo’ side of things.

I don’t remember whether I ever mentioned this before, but actually, I’m a biologist. I was raised by parents who believe in nothing much but what can be measured and counted and I was like that too, for the longest time. In my old diaries you still find entries like, “all healing practitioners are quacks that do more harm than good” and “how dumb must you be to believe in something like astrology?”. Well, to be sure, I’ve come a long way, and I can proudly say, all that I know to be true now I’ve tested and proven for myself. I’ve come by it the honestly.

My former collegues would probably turn in their beds (they’re not dead yet after all) if they read what I write about here, seeing as even something as basic (for me!) as plant consciousness was a topic of much mirth and derision for them. But actually, the way I came to believe in what I believe in makes me the better scientist in my eyes. 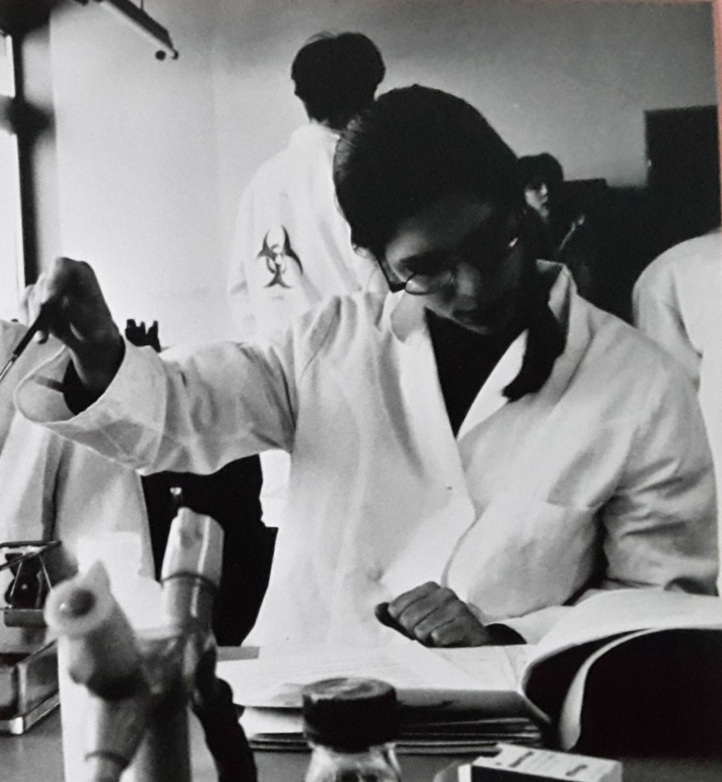 Scientists like to claim that what cannot be proven (or measured) can’t exist. This is not all that far from Hermione’s famous saying “I mean, you could claim that anything’s real if the only basis for believing in it is that nobody’s proved it doesn’t exist!”. Of course, going from there, are my sensations real? Do my thoughts exist? A scientist would answer, why, of course, you can measure the brain wave activity (or rather, their electrical potential). Yes, you can. You can even distinguish negative from positive emotions. I seem to remember reading somewhere that it might be possible to reconstruct actual thoughts. But scientists do like to gloss a bit over the fact that nobody quite knows where the electricity measured actually comes from. What gets those neurons firing, and how? You of course know how it feels inside your head or inside your self when suddenly inspiration hits, but how does it do that? Where does an idea originate?

It seems to me what is needed here is a very very open mind, and this is something, the one thing maybe, I pride myself in. I vividly remember the time when I’d started on my path of woo (as we like to call all those esoteric, New Agery, unexplainable phenomena) but was not yet all that far along, and attending a weekend workshop doing some kind of family constellations work, putting up archetypes instead of family members. Well, that workshop ended with the facilitator calling on “Archangel Zadkiel and the Violet Ray of Transformation”. Yeah. Right. Internally, I was face palming, or rather, face smacking myself, with the distinct thought of “Oh nooooo it won’t be long until I’ll believe in that nonsense too”. But, open mind, right? Don’t disregard anything before you’ve at least tried to experience it for yourself. So, next day, I went and got a book on angels, and that was that. Sigh.

Unfortunately, most people don’t do as I do (or Albert Einstein, who formulated his theories after imagining riding a beam of light through space, after all!) but rather stick to their measuring tape and reject outright as “cannot be” what they don’t (yet) understand, what isn’t readily apparent, what doesn’t fit into their worldview as it is now. But – how do we know what we can’t measure (yet) because we don’t have any instruments to do so (yet)? I mean, radiowaves have been with us and around us as long as we exist, but without any means to make them audible or visible or detectable, we remained ignorant of their existence.

Or, for another example, take “junk DNA” For the longest time, since it was discovered somewhen in the sixties, it was thought to be literally junk, without any function, that is, not encoding genes. As this non-encoding DNA actually makes up 95% (yes, read that again, it bears repetition: ninety five percent!) of our DNA, that’s a lot of stuff to be reproduced faithfully in each and every cell and to be carried down generation after generation. Nature abhorrs waste, it was quick to suspend production of vitamin C after humans started eating so many tropical and citrus fruit, as just one small example, and it makes no sense at all to copy and paste all those telephone books without need.

So, now, scientist have discovered that part of this non-encoding DNA actually has funcions after all: things to do with the structure of chromosomes and the regulation of genes. There still remains non-encoding DNA for which no function can be determined. Experiments where mice had parts of these DNA segments lopped off “showed no differentiation in phenotype” – so these parts of DNA are still more or less openly called junk. And again there is fault in this thinking. Does every function have to show up bodily? Does every function have to be measurable? How do we know it’s not serving a purpose that is as of yet unknown to us? Like, oh, the appendix, that was thought to be a relic until recently when it was discovered it is actually a storage reservoir for a back-up copy of our intestinal flora.

And often enough, things are taken the wrong way round. You may remember having heard about some experiment, where neuroscientists stimulated the brain (using a contraption colloquially called the “God helmet”) with a low-intensity magnetic field, which resulted in test persons having out-of-body experiences or what we might call “Visions of God”. The conclusion reached was, and I simplify greatly here, that visions of God are malfunctions of the brain. Of course there’s another way to look at this: you could just as well argue that human beings are wired, predisposed to experience God. After all, it is possible to stimulate certain areas of the brain to produce re-run of memories like live streaming a film that is, to the test person, indistinguishable from actual reality. Here, nobody concluded that the act of seeing must, therefore, be a malfunction of the brain, a misfiring of neurons.

For the longest time, fun was made of concepts such as “aura” or the “meridians” of the body. To my greatest delight, not that long ago, scientists discovered that cells, and only the live living ones, emit light. They now call it “biophotons” and quite happily ignore that this is, in fact, what us woo-people sense as the aura. I read something similar about acupuncture and the much ridiculed meridians. The latter have now been “discovered” as part of the cardiovascular system and are refered to as the “Primo Vascular System (PVS)”.

So. I don’t begrudge science their discoveries. I’m also not going down the “told you so, told you so” road. But inside, I’m still having a private little happy dance. It seems there may still be hope to have plant consciousness “discovered”.

As I said above, I’ve come to my understanding of the world the hard and honest way. Whenever I experienced something I had to bend myself into pretzel shape to explain (“Did this laying on of hands really work??”, “Did I really see an angel just now??”, “Have we really just seen a… a… ghost!!??”) I knew I had to stop right this minute and ask myself, “Is there a simple way to explain this, even if it seems improbable or impossible at the moment and even if I really really don’t want it to be true?” And in all of these instances, the answer would be something like “If only I believed in ghosts, what I just experienced would make absolute sense, the explanation would be simple, short and logical.”

There are still lots and lots of those pretzel shapes buried in hard science – these are usually the bits scientists like to not dwell on for very long. For example, take the Miller-Urey experiment, an experiment conducted to try to re-create the way life (or the first organic molecules anyway) may have come into being. It proved that by mixing up water, methane, ammonia, and hydrogen and heating it up in specific ways, amino acids can be produced. This is how, it is postulated, the early organic compounds that make up life created themselves. Now, I’m sorry to point out, there is huge difference between generating amino acids and building complex proteins out of them, not to mention re-creating them faithfully in exactly the same way in exactly the right spot they are needed. Our bodies still can’t just do this, they need the IKEA leaflet, that is, DNA as a how-to, which-goes-where building plan. But DNA itself is (as mentioned before) a highly complex construct itself, which patently didn’t just pop into being by itself and has, as of yet, never been created out of bits of water and gas. It also has no function at all as long as there are no proteins; in fact, it needs to be read and build by proteins. So, conundrum. No proteins without DNA, no DNA without proteins, so how the heck did they come to exist the way they do? There is no logical way to explain this, no HOW and no WAY that makes sense in any scientific manner.

I’ll leave you to yourself now to ponder this question.

(The previous post in this series can be found here.)